Reforestation and conservation cuts will only increase flooding and other environmental problems in an age when these problems are being amplified by climate change. We need to learn from past environmental mistakes if we wish to avoid repeating them.

On April 25, Ontario Premier Doug Ford announced two cuts to programs that were helping to prevent environmental problems such as flooding that are becoming even more acute with the onset of climate change

Ford axed the Fifty Million Tree Program that was started in 2008. This reforestation program was about half way through its target and cost $4.7 million annually. He also announced that provincial funding for Conservation Authorities, now a meagre $7.4 million a year, would be cut in half. These programs designed   to promote reforestation are helping to control flood risks, risks made worse by climate change impacts because climate change is causing increasing precipitation in Southern Ontario in the winter and spring periods. Such programs, which help reduce flooding risks, are needed more than ever before because the forests, many of which are wooded wetlands, help soak up the increased rain and snow melt

Ford’s $12.1 million cuts for trees and flood control is especially galling in view of the small amounts of money involved in comparison with the catastrophic damage to the province that will ensue as a result of the effects of climate change and deforestation going unaddressed.

The cuts also illustrate historical amnesia, a failure to remember why these programs were developed in the first place. Reforestation programs in Ontario go back to the first provincial tree nursery at the Ontario Agricultural College (OAC) (now Guelph University). Operated by a dedicated graduate forestry student, Edmund Zavitz, who took on the running of the nursery as a summer job, it grew its first tree in 1904. The need for reforestation was especially front and centre at OAC at that time since the campus had been cut off from the world for a few days by turbulent floods that broke milldams and damaged factories. The reason for the massive floods that ravaged Guelph and much of Southern Ontario during the first half of the 20th century was a rock bottom level of forest cover of about nine per cent. Many watersheds such as the Thames, the Grand and the Ganaraska were worse at four per cent. The denuding included some of the most critical areas needed to absorb precipitation surges, which swamp forested wetlands along streams had done in the past. In addition, the remaining woodlands were composed of sickly, scarred trees that could not regenerate because roaming livestock ate the young saplings.

With the help of an OAC Alumni activist who became  Ontario Premier EC Drury, Zavitz dedicated his life in the public service (he died in 1968) to the cause of reforestation and conservation. Despite massive tree planting, however, despite decades of leadership roles where among other things he served as Deputy Minister of Forests, Zavitz could not accomplish very much since his reforestation efforts were simply only able to hold on to the tiny five per cent of southern Ontario’ landscape covered by forests.

For decades, the new forests he was able to place on the landscape simply did no more than compensate for the huge areas that farmers were continuing to burn out through land clearance. The situation was made worse when in 1933 the newly elected Liberal government of Mitchell Hepburn embarked on a wave of firings of foresters and budget cuts for tree planting and fire control. These moves were based on simplistic populist rhetoric that exalted uneducated lumberjacks over university trained foresters.

What caused public opinion to change in support of Zavitz’s policies was an ecological disaster in the form of the Great Thames River Flood of 1937. Most dramatically this disaster put about a fifth of the City of London underwater. In response to the disaster, Drury lamented how, “In our own time, the Grand and the Thames Rivers through no other reason than the over clearing of their watersheds…have become serious menaces, at one time being the source of destructive floods, at another time having so little water that they become polluted or stagnant.” A former student of Zavitz from the OAC, Watson Porter, wrote that, “Something must be wrong when farmers are obliged to draw water in the summer and must be rescued from their upstairs windows in the winter.”

The inundation of London was simply the most catastrophic of the flooding disasters that hit many Ontario cities with regularity during the Great Depression. Port Hope in the pathway of the Ganaraska River and in an area stripped bare of its forests had its downtown core inundated with flood waters every two years. In addition, the stripping of its watershed’s forests had become so severe that its headwaters in the Oak Ridges Moraine, like much farmland in the province, had been reduced to dangerously shifting sand dunes. Brampton was routinely hit by similar devastation from Etobicoke Creek, originating in the then deforested Niagara Escarpment (now restored).

In response to the great floods of the Depression, Zavitz, his student Porter, and Drury developed an effective political campaign. Al Burnes, the most creative of their colleagues and one of the foresters fired by Hepburn’s hachet man Frederick Noad, nurtured a veterans’ group, Men of the Trees. Barnes organized spectacular parades of up to 60,000 veterans in prominent locations such as Toronto’s Coronation Park. 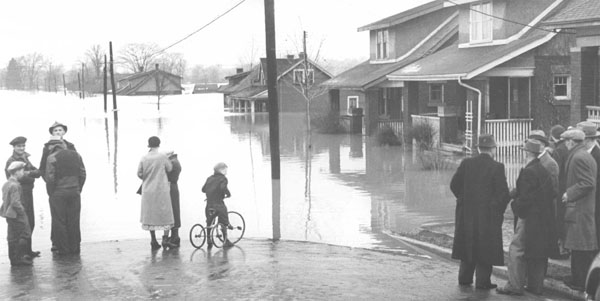 Barnes’ well orchestrated and politically savvy campaigns led to two major reforms in 1946. One was the passage of the Trees Act. This for the first time gave municipal councils the power to restrict tree cutting on private land. The other reform was the Conservation Authorities Act. This created watershed based authorities with the objective of reducing flood damage by increasing forest cover. One of the most successful of these was the Ganaraska Authority, It increased its watershed forest cover from five to fifty per cent. This massive reforestation made Port Hope’s flooding woes a thing of the past.

One of the reasons Zavitz’s programs became so effective in this period was that two of the most powerful politicians in the province: Premier John Robarts and his Treasurer, John White, lived through as adolescents in London the Thames Flood of 1937. From this experience, they understood how destructive floods could be and how reforestation and conservation could prevent flooding disasters. With the funds they poured into reforestation and conservation, forest cover increased in Southern Ontario from 9.7 per cent in earlier periods to 25.2% in 1963.

While across Southern Ontario there is still around 26 per cent forest cover in some watersheds, in others, forest cover is still as low as the five percent that triggered flooding disasters in the past. Even the Fifty Million Trees Program launched in 2008 was far below the target level of reforestation that was being undertaken when the network of provincial nurseries launched by Zavitz was terminated by Premier Bob Rae in 1993. And of course in the present day, the need to increase forest cover is greater because increased precipitation in Southern Ontario, brought about by climate  change, is increasingly concentrated in the winter making spring flooding dangers worse.

Rae’s failure to win another mandate should serve as a warning to Ford. His party sank to the depths in 1995 after slashing funding for conservation authorities and reforestation. Hopefully, Ford will lose his historical amnesia and appreciate why Ontario cities have been spared the devastation to be found, for example, in the more deforested regions around Montreal. This city has never faced up to its loss of trees and forests and the risk that this poses, perhaps because it lacked such champions of conservation as Drury and Zavitz.